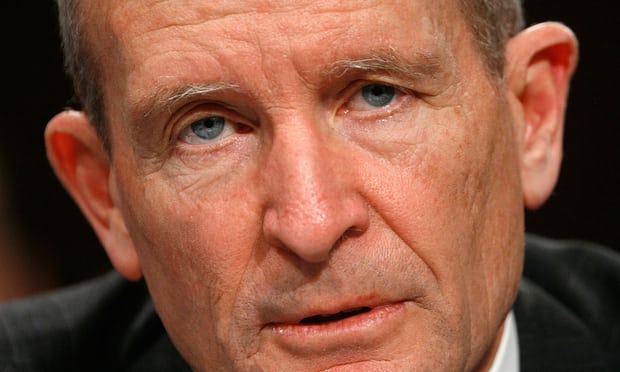 WASHINGTON – MARCH 10: National Intelligence Director Dennis Blair testifies during a hearing before the Senate Armed Services Committee on Capitol Hill March 10, 2009 in Washington, DC. The hearing was focused on the current and future worldwide threats to the national security of the United States. (Photo by Alex Wong/Getty Images)

A senior former US military commander and intelligence chief has warned against a pre-emptive “bloody nose” strike on North Korea.

Retired Admiral Dennis Blair said Washington needed to be ready to respond militarily if North Korea attacked the US or its allies in the region – “but not a first strike; it’s just high risk and unpredictable”.

The former director of national intelligence warned about the difficulty of destroying North Korea’s nuclear weapons, amid reports a targeted strike has been canvassed by the Trump administration.

“With all the tunnels they have, with all of the difficulties of intelligence in that country, I don’t think an American-South Korean strike [on the North] would have a high probability of taking out all of their nuclear capability and then you’ve left them with not only with nuclear capability but also an aggrieved sense of it,” said Blair, who held the intelligence post from early 2009 to mid 2010.

There were risks of escalation if Kim Jong-un’s regime thought the country was about to be invaded, Blair told the Guardian. Any US-led action should be seen as a response to a North Korean provocation to avoid any misunderstanding.

Despite Donald Trump’s desire to be seen as unpredictable, Blair said: “I think this business of treating unpredictability as a virtue in dealing with North Korea is a lot more dangerous than predictability.

“We’re much stronger,” he added. “We need to be consistent and powerful and persistent. I think that’s a lot safer, so a lot of this talk about you know, sneak up on them and give them a bloody nose, be unpredictable, I think is not correct for dealing with a country like North Korea.”