Washington: The dogs are barking – mad.

North Korea emerged from Donald Trump’s weekend twitterstorm, with a Monday threat of its own. Pyongyang said it was ready to shoot down US military aircraft, even before they might enter its airspace.

As these guys hurl insults and abuse at each other the lives of millions and the fate of nations are at stake, and the region and the world can’t be sure how serious they are.

Is each leader driven by thin-skinned vanity? Does Armageddon beckon?

Or if we’re observing a highly-orchestrated pissing contest by wildcard leaders, while more sober, more serious minds work behind the scenes to defuse the crisis?

Consider the latest abuse and insults: Trump, winding up supporters at a Friday evening rally in Alabama: “[Kim Jong-un] should have been handled a long time ago, but I’m going to handle it because we have to handle it: Little Rocket Man.”

Ri Yong-ho, in a speech at United Nations HQ in New York, on Saturday: “[Trump’s threats are] making our rocket’s visit to the entire US mainland inevitable all the more.” 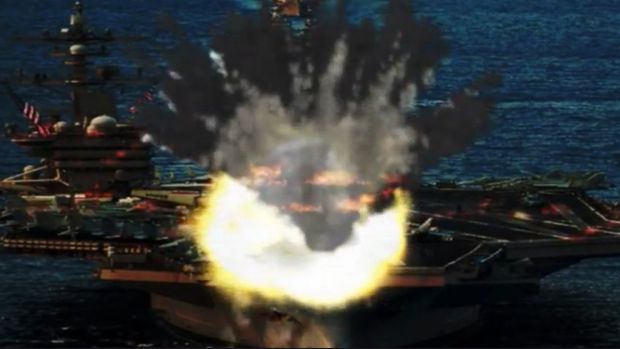 Trump, tweeting on Saturday evening: “Just heard Foreign Minister of North Korea speak at UN. If he echoes thoughts of Little Rocket Man, they won’t be around much longer!”

Ri, in a kerbside interview in New York on Monday morning: “It was the US who first declared war on our country…[so] we will have every right to make countermeasures, including the right to shoot down United States strategic bombers.” 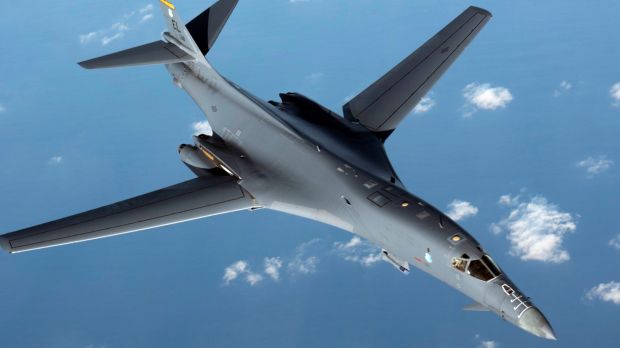 Pyongyang says it is ready to shoot down US military aircraft, such as this US Air Force B1-B Lancer. Photo: AP

Hmmm – the weight of Trump’s threats – “totally destroy…” and “won’t be around much longer” – doesn’t sound like an invitation for tea and cucumber sandwiches at the White House. 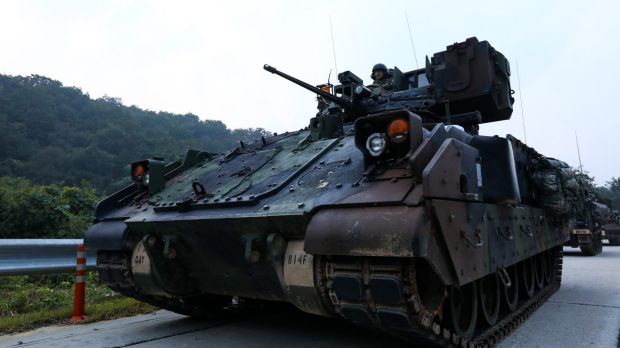 Analysts say the US is unlikely to start a war without a direct attack from North Korea. Photo: Bloomberg

And Kim is just as bolshie.

Here’s his response to Trump’s threat of total destruction: “Now that Trump has…insulted me and my country…and made the most ferocious declaration of a war in history that he would destroy the DPRK [Democratic People’s Republic of Korea], we will consider with seriousness exercising of a corresponding, highest level of hardline countermeasure in history.” 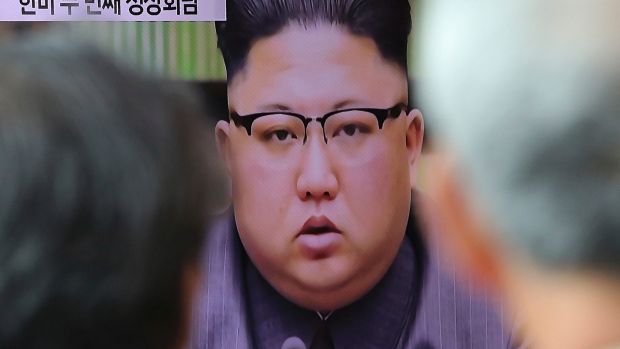 North Korean leader Kim Jong-un has shown in his comments that he is just as bolshie as US President Donald Trump. Photo: AP

Some analysts say we all should take a deep breath, assuring us that history shapes the outcome of such crises – which is to say that the US is unlikely to start a war without a direct attack from North Korea; and that if Trump can continue winding up pressure on Pyongyang, without resort to arms, Kim most likely will cave at a time of his choosing.

But history also confirms Pyongyang did take out a US aircraft in 1969, killing all 31 crew on a Lockheed EC-121 spy plane that the North claimed was deep into Pyongyang’s airspace, but which the Pentagon insisted was 50 nautical miles off the North Korean coast. 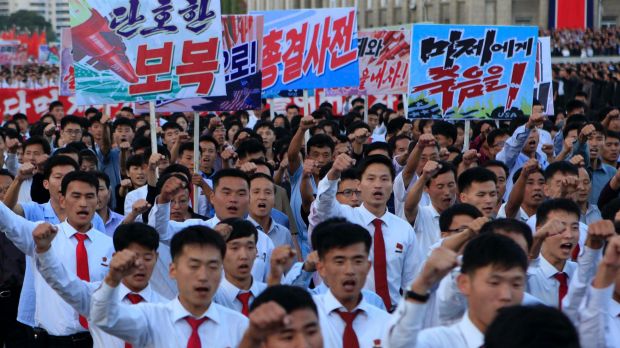 Then president Richard Nixon reportedly considered nuclear retaliation and the Pentagon was ready to strike – in 2010, former US fighter pilot Bruce Charles told NPR that he had been put on standby to strike the airfield from which the North Korean aircraft had taken off – and Charles’ aircraft had been armed with a B61 nuclear bomb, with a 330 kilotons yield that made it 20 times more powerful than that dropped on Hiroshima.

After several hours, Charles said, he was ordered to stand down. 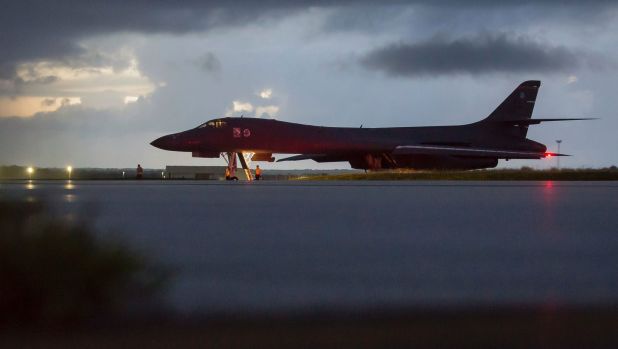 Last week’s decision by Trump to have US aircraft fly close to the North Korean coast, north of the DMZ, was potentially an invitation for history to repeat itself. Photo: AP

Nixon’s problem was the same one Trump is being warned of today. As explained by George Washington University historian Robert Wampler: “The US did not have a very good menu of options when this happened, which sort of constrained them in their ability to pick and choose amongst something that would work, and also contain the situation.”

Nixon was congratulated for exercising restraint, as did former president Barack Obama when an international investigation concluded that a torpedo that sunk the South Korean Navy ship Cheonan, with the loss of 46 seamen, had been fired from a North Korean vessel. Obama moved ships and aircraft, but did not strike. 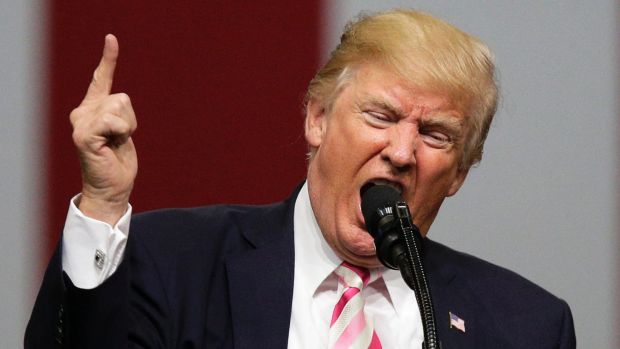 Trump has been talking tough on North Korea. Photo: AP

In the current crisis, ripe as it is for miscalculation or bravura, can Trump be expected to respond with the same restraint? There’s an argument that last week’s decisions to have US aircraft fly close to the North Korean coast, north of the DMZ, was an invitation for history to repeat itself.

Much of what Trump and Kim have to say is rhetoric – buried in their words are little noticed “ifs” that reduce their threats to the usual “all options are on the table” boilerplate that is being overly analysed.

Consider this from The New York Times: “But Mr. Trump’s tweet over the weekend appeared to go further, suggesting that mere threats, rather than a military attack, could drive him to wipe out the country. Whether that was one of his characteristic outbursts or a strategic effort to intimidate North Korea was not clear – even to some of his advisers.”

Clearly what is different in this crisis is the key personalities – Trump and Kim.

Former director of US national intelligence retired Admiral Dennis Blair explains a consistency, which he says, has governed North Korean policy for decades – “[Kim] basically is carrying on that policy, which is to provoke, take outrageous actions below the level of triggering a major conflict with the United States and South Korea”.

Blair told Politico: “This pattern of operating below the level of a major war, but sufficiently alarming to get the attention of other governments, is quite consistent, and he seems to have updated it, pursues it perhaps more vigorously than others, but I don’t see a radical change in the North Korean game.”

The same can be said of Trump, who brings all his showmanship and “only I” ethos to this long-running crisis, in which all three of his predecessors declared it unacceptable for North Korea to become a nuclear power.

Who’ll win out in this White House – the steadying hand of history or Trump’s daring-do?