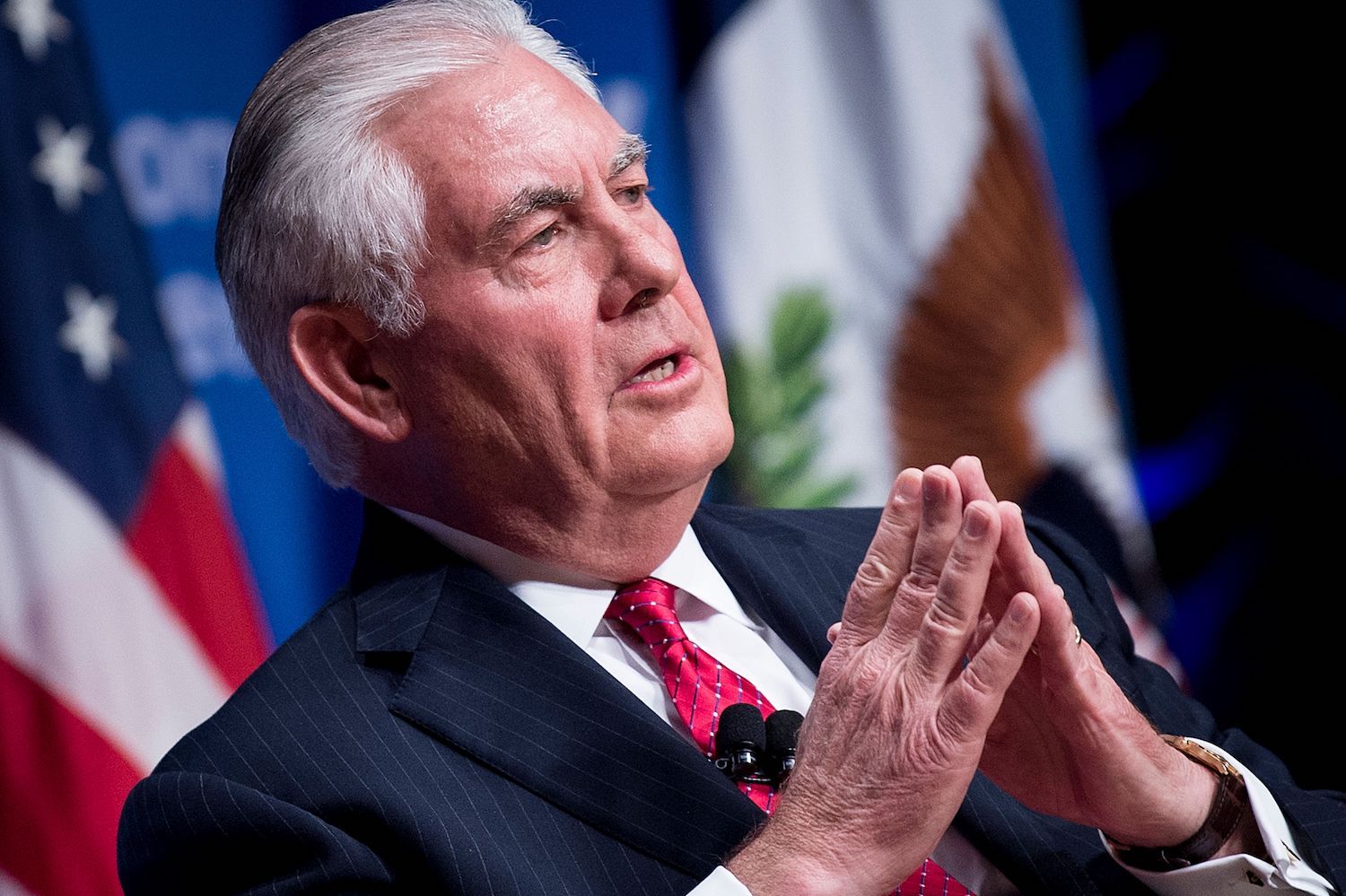 I rarely find myself thinking along similar lines as fellow Foreign Policy contributor Stephen Walt. Nevertheless, just as I was contemplating an article that would take note of a few of U.S. Secretary of State Rex Tillerson’s underappreciated accomplishments, Walt’s own defense of America’s much-pilloried top diplomat appeared in these pages.

Like Walt, my enthusiasm for the task is decidedly tempered. There’s no denying that the State Department has been going through an extremely rough patch of late. Much of it, no doubt, is of Tillerson’s own making. But he’s had plenty of help — not least from President Donald Trump, himself. Whether inadvertently or not, Trump on several occasions has appeared to contradict and undercut his secretary of state on key issues, creating the powerful impression that Tillerson simply does not speak for his boss. Tillerson has also repeatedly bumped up against a White House personnel operation that has severely hampered his ability to fill out key positions that are vital to America’s diplomatic firepower.

The National Security Council also must share in the blame. It’s the body that’s supposed to ensure that the president, his secretary of state, and all other cabinet heads are in sync, fully coordinated, and singing from the same sheet of music. To the extent that’s clearly failed to happen in several high-profile instances, it’s a sure sign that the NSC staff has yet to fully get its arms around one of its core missions.

It should be said that just about every administration experiences problems along similar lines. There are always growing pains. It takes time for new teams filled with big personalities and egos to gel. The learning curve can be steep. That said, the degree of dysfunction, crossed wires, and occasional chaos does appear particularly severe this time around — perhaps not surprising in light of the fact that virtually all the key players, including the president, the secretary of state, and the national security advisor came to their positions with exactly zero experience operating at the highest levels of government and the policy-making process.

With time and learning, there’s reason to believe that the administration more broadly can overcome its initial stumbles. Whether the same can be said of Tillerson is much less clear. The conventional wisdom overwhelmingly has him gone by early 2018. I have no way of knowing if that’s true. But here’s something that I do know: If your objective is to maximize the effectiveness of American foreign policy, it’s essential that the secretary of state be universally perceived as having the full backing of the commander in chief. That’s the sine qua non of a fully empowered U.S. diplomacy. With it, all of Tillerson’s other problems — from his department’s staffing shortfalls to its allegedly low morale — are eminently manageable. Without it, we face the prospect of a foreign policy that is chronically failing to fire on all cylinders.

Could Trump at this late date still act to reaffirm Tillerson’s role as his chief representative to the world? In theory, it’s possible, though not easy. I’m not at all sure what would be the best way to do it. But I am certain that unless the president is prepared to make a major effort to reestablish Tillerson’s unambiguous authority to speak on his behalf, the country would be better served if Tillerson stepped aside sooner rather than later in favor of someone who clearly does enjoy Trump’s full confidence.

It pains me to say that. Full disclosure: After Tillerson was nominated last December, I spent a month working for the State Department transition team. Most of my time was taken up writing background memos to help prepare Tillerson for his confirmation hearing. But I did get to spend several hours watching him up close as he plowed through multiple murder boards. I also got to spend a couple of hours over two separate sessions briefing him directly on various issues related to the Middle East. While two or three support staff were also in attendance and posed the occasional question, these meetings basically consisted of Tillerson and myself engaged in an extended one-on-one exchange.

That experience left me extremely impressed and very reassured that U.S. foreign policy would be in good hands. Tillerson exuded gravitas. He commanded a room just by entering it. He knew a lot. He’d seen a lot. He’d gone toe-to-toe with several of the world’s most ruthless despots and held his own. He was gracious but tough — a realist who asked good questions and thought strategically. It was easy to see why the likes of Bob Gates, Condoleezza Rice, Steve Hadley and, for that matter, my old boss Dick Cheney thought so highly of Tillerson and applauded when Trump selected him.

Alas, Tillerson’s actual path at State has been far bumpier than many anticipated, myself included. Even so, has it really been the unmitigated disaster that so much of the press corps and chattering class seems hell-bent on portraying? There’s a relentlessness to the media coverage, a piling-on if you will, that does seem to me unbalanced and unfair — at least insofar as it consistently overlooks some of the genuine policy successes that Tillerson has helped shepherd during his brief tenure at Foggy Bottom.

Two, in particular, deserve highlighting. The first concerns the Trump administration’s escalating pressure campaign against North Korea. On Tillerson’s watch, of course, the United States has pushed through two unanimous U.N. Security Council resolutions imposing ever more draconian economic sanctions on Pyongyang. Yes, U.N. Ambassador Nikki Haley deserves ample credit for skillfully maneuvering the measures through Turtle Bay’s byzantine labyrinth. Trump’s timely interventions with his counterparts also, no doubt, played an important role. But as anyone who’s spent significant time working at senior levels of the U.S. government knows, high-stakes U.N. resolutions don’t pass — much less garner the support of major-power rivals like China and Russia — without the secretary of state having done his share of heavy lifting behind the scenes, as well.

But set aside the high-profile action at U.N. headquarters. Take a look at what’s been happening below the radar screen. At Trump’s direction, Tillerson and the State Department have been methodically getting countries across the world to tighten the diplomatic and economic noose on Pyongyang. More than 20 states have taken new actions in this regard. Spain, Kuwait, Peru, Mexico, and Italy have expelled the North Korean ambassador. The United Arab Emirates has shuttered the North’s diplomatic mission and stopped issuing new visas for North Korean workers, following similar steps by Qatar and Kuwait. Both Sudan and Egypt have announced their intention to sever longstanding military ties to the North. The Philippines and Singapore, each among Pyongyang’s top 10 trading partners, have decided to end all commercial links. Even Myanmar has sent a North Korean diplomat packing.