Jerusalem, etc.: How US global leadership has changed under Trump 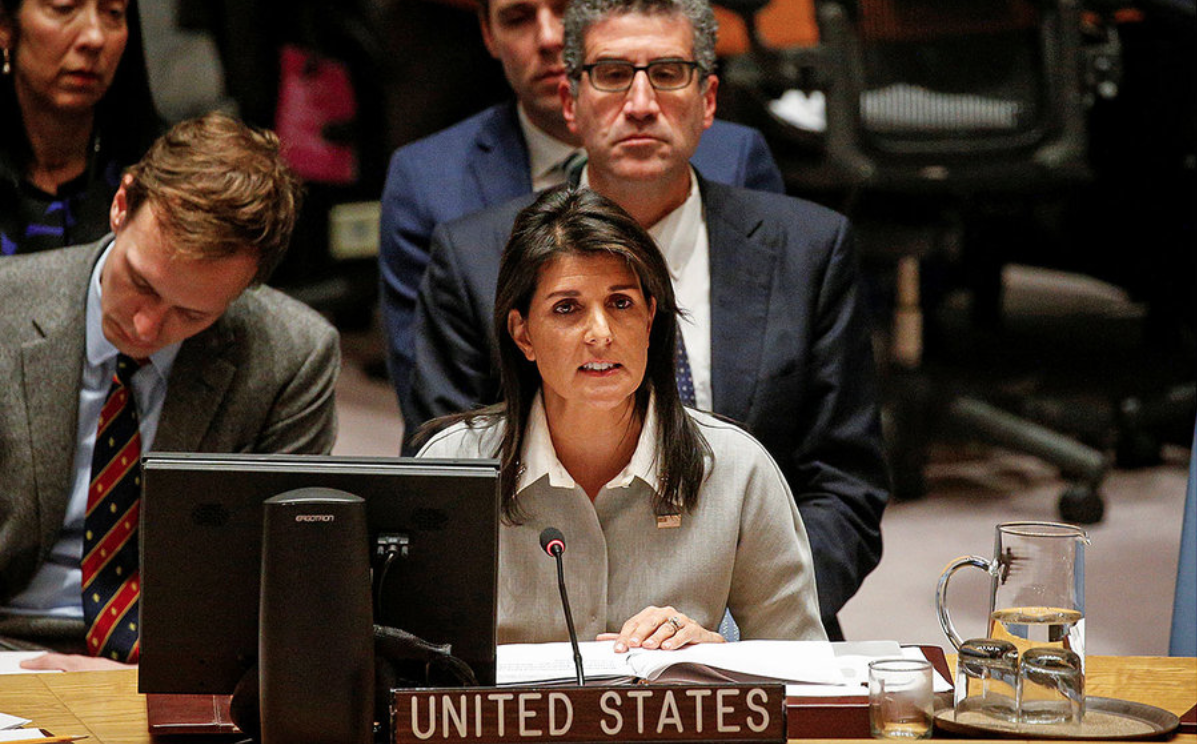 Nikki Haley, the US ambassador to the United Nations, addresses a Security Council meeting on the situation in the Middle East at UN Headquarters in New York, Dec. 8, 2017, two days after President Trump recognized Jerusalem as the capital of Israel. (Brendan McDermid/Reuters)

Washington — The scene at the United Nations Security Council last week was reminiscent of the run-up to the US invasion of Iraq in 2003, when the international community balked at President George W. Bush’s “with us or against us” message to the world body concerning the coming war.

This time the impetus for the emergency Security Council meeting was President Trump’s recognition of Jerusalem as the capital of Israel – a move in opposition to decades of US-backed council resolutions on the holy city’s status – and neither friend nor foe of the United States was having anything to do with it.

Bolivia’s United Nations ambassador fumed that if the Security Council did not stand up to the rogue US action, the Council would cease to be anything other than “an occupied territory.”

A group of America’s European allies, some of whose leaders had personally cautioned Mr. Trump against the move, issued a joint statement at the council session condemning the US action as contrary to established international policy on the issue and “unhelpful in terms of prospects for peace.”

But the Jerusalem decision was only the latest in a year of go-it-alone actions and retreat from international cooperation and commitments that have typified the “America First” president.

Trump came into office with two seemingly contradictory messages to the world: one a nationalist clarion call that the US would no longer be a tied-up Gulliver, but would break free of international strictures and put its own interests first; and the other, a commitment to restore “strong American leadership” in confronting the world’s pressing security challenges.

Nearly a year later those two messages have taken form through actions suggesting that under Trump, it’s hard power over soft power, national action over international cooperation, and immediate gains over what a business-mogul president sees as gauzy long-term pursuits.

The promotion of hard power and a nationalist vision of prosperity over values and soft-power pursuits is expected to gain further traction when Trump releases his first National Security Strategy Dec. 18.

Thus Trump’s first year has been marked by a stark withdrawal from international diplomacy and from the system of international institutions and governance that the US designed and led for over seven decades.

In ways large and small – from withdrawing from the Paris climate accords and the Trans-Pacific Partnership (TPP) trade deal, to pulling out of an international migration pact and the UNESCO culture and education agency – Trump has shown his disdain for the system of international institutions the US built.

Yet at the same time, Trump has coupled a diplomatic retreat with a reemphasis on military power, which – under a long line of Republican and Democratic administrations alike – had increasingly shared the national-security stage with priorities like democracy and human rights promotion, development, and international trade expansion.

This week Trump signed a $700 billion defense authorization act he called the “first step in rebuilding our military.” He has stepped up US military action against ISIS in Iraq and Syria while dialing back the US role in Syria diplomacy, recommitted to a US military presence in Afghanistan, and pursued a hard-power posture toward North Korea – once quipping that diplomacy toward Pyongyang was a “waste of time.”

For some US foreign-policy hawks, like former ambassador to the UN John Bolton, Trump is pursuing bold leadership – the Jerusalem decision being just one example – after what they saw as two terms of namby-pamby interaction with the world under President Barack Obama. 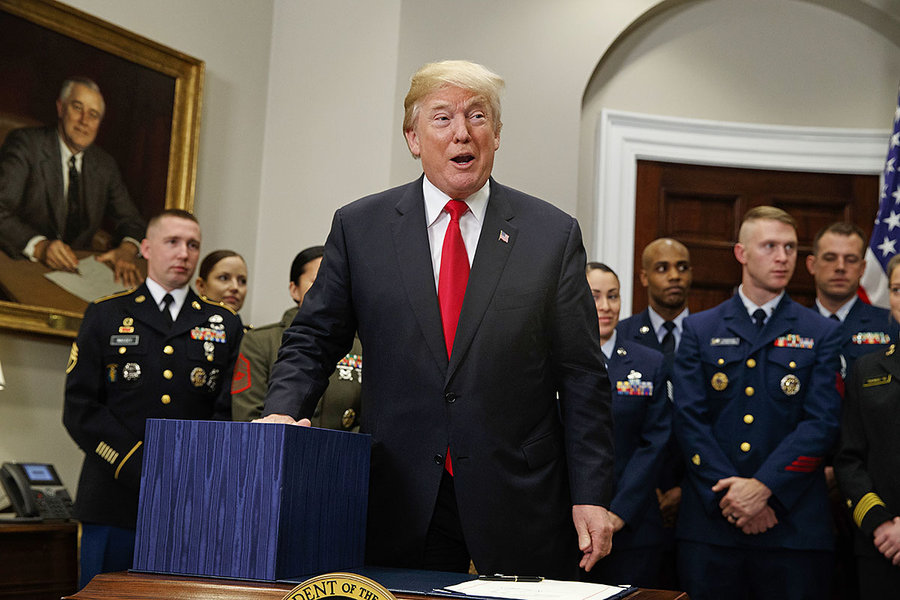 President Trump holds onto a box containing the National Defense Authorization Act for Fiscal Year 2018, in the Roosevelt Room of the White House, Dec. 12, 2017. (Evan Vucci/AP)

Yet while many in the foreign-policy community see Trump as a sharp deviation from the path followed by post-World-War-II presidents, few concur with the idea that a more muscular but inward-focused America will provide stronger global leadership.

“Trump represents a clean break with the last eight decades of American foreign policy – really going back to Pearl Harbor – and a dismissal of the liberal order of American-led institutions the US worked so hard to build,” says Charles Kupchan, senior director for European affairs on Mr. Obama’s National Security Council and now a professor at Georgetown University.

“There may have been differences over the years between Republicans and Democrats concerning the means,” he says, “but even George W. Bush, despite the Iraq War, was not interested in dismantling the US-led international order, but rather in advancing it.”

But Trump, Professor Kupchan adds, “sees that same order as a recipe for other countries to take advantage of the US. He wants to back away from the international institutions and agreements that [other presidents] saw advancing US security and prosperity, but which he sees as tying us up.”

Others are more categorical about the impact of Trump’s foreign policy.

“What we’ve seen over this first year of his presidency is very much in line with the nationalist vision from the campaign that promised a retreat from international diplomacy and governance and an end to the free-riding of others on the back of the United States,” says Stewart Patrick, director of the Council on Foreign Relations’ International Institutions and Global Governance Program. “What that has translated to in practice is an almost total abdication of American leadership.”

Dr. Patrick, who served in the State Department during George W. Bush’s first term, says the Trump era has echoes of the “interwar period” nearly a century ago that began with the US rejection of the stillborn League of Nations. An expert in the evolution of the concept of national sovereignty, Patrick says Trump is a “throwback” to an era of a rigid, nationalist sense of sovereignty that rejects the interdependence at the core of postwar internationalist policy.

A constituency that felt cheated

Kupchan, a professor of international affairs at Georgetown University’s School of Foreign Service in Washington, says Trump’s “foreign-entanglement objections” have roots that go back to the Founding Fathers. But he says Trump has found support for his views in a constituency that felt cheated and left behind by the US-built international system.

“Trump represents a part of the population to whom the international order the US built has not been kind,” he says. “It’s the swath of the population that feels disadvantaged by globalization, that sees the US championing trade deals that led to the disappearance of their jobs, and that does not recognize a country that is more and more diverse.”

Still, Kupchan says that when it comes to a US “withdrawal” from the world, “the bark has been much more pronounced than the bite” – largely because of Trump’s pumping-up of global hard-power pursuits. He points to reinforced military alliances in East Asia, higher force levels in Afghanistan, and an increased pace of overt and covert counterterrorist operations.

Others go further, contending that reports of Trump’s isolationist and unilateral tendencies are overblown.

The Trump administration, and Secretary of State Rex Tillerson in particular, have had early successes mounting an escalating pressure campaign against North Korea and with efforts to thwart Iran’s rising influence, in part by fostering renewed ties between Iraq and Saudi Arabia, according to John Hannah, a senior counselor at the Foundation for the Defense of Democracies in Washington.

Both portfolios have flummoxed US diplomats for years, and the attention and priority the two issues are getting do not suggest an inward-turned and globally cavalier administration, says Mr. Hannah, who was a senior national security adviser to former Vice President Dick Cheney.

What is happening, however, is that the void left by the US retreat from its traditional role of global leader is being quickly filled by others, international affairs experts say.

“Where Trump is pulling back, we’re seeing other countries move in to take advantage of that at every turn,” says Kupchan, pointing to China advancing its own regional trade initiatives as TPP has faltered, or France moving to fill the vacuum left by the US retreat from a lead role in climate policy and from the Middle East.

“America’s main allies are increasingly talking about a post-American era where they’re going on with life without the US as a reliable partner,” he says.

The Council on Foreign Relations’ Patrick says that whereas the international debate during the Bush and Obama years “was whether it was preferable to have America leading from out front or leading from behind, today the question out there is what happens when there’s no leading at all, what does a world without American leadership portend?”

The quick answer seems to be a growing tendency of countries once aligned with the US to “hedge their bets by turning increasingly to China,” he says. Another trend is what appears to be a widening field of operation for expansive regional powers – along the lines of what Iran has done in the wake of a US pullback from the Middle East.

Patrick says it has yet to be determined if the US retreat from its postwar global role will be a Trump “parenthesis” or the acceleration of an ending American-led era.

But he says what is clearly not coming to an end is an era of global challenges requiring global answers and international leadership.

“Interdependence is not going to go away,” Patrick says, “but what may go away is the certainty and authority of the US as a relatively enlightened global leader. If the US retreats to become just another cynical ‘great power’ pursuing its own nationalist advantages,” he adds, “it’s not going to serve the world and it’s not ultimately going to enhance US security and prosperity.”