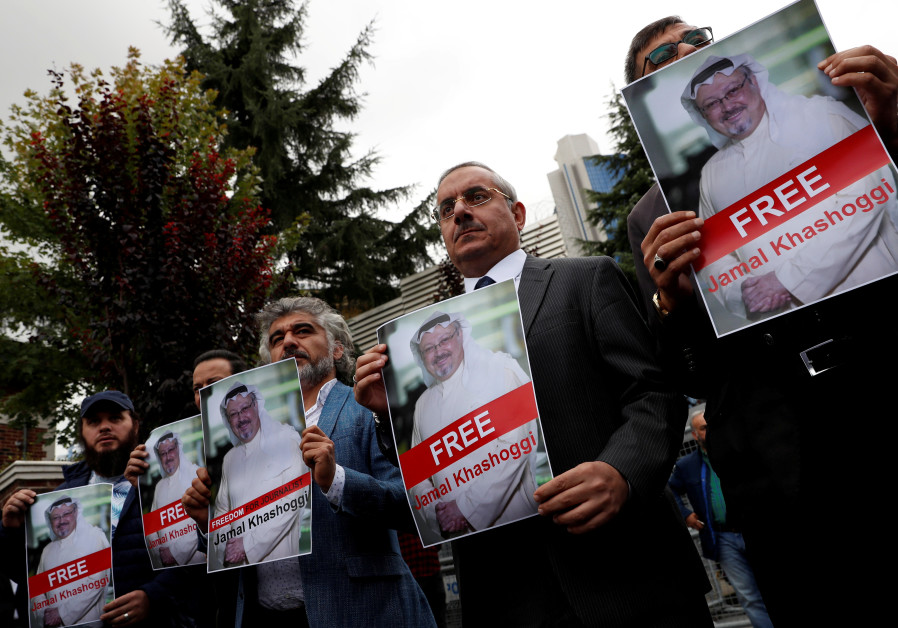 WASHINGTON- President Donald Trump’s strategy to contain Iranian power in the Middle East by forging Arab allies into a US-backed security alliance was in trouble even before the murder of Saudi journalist Jamal Khashoggi. Now, three US sources said, the plan faces fresh complications.

Khashoggi’s murder on Oct. 2 in the Saudi consulate in Istanbul has drawn international outrage against Crown Prince Mohammed bin Salman, with Turkish officials and some US lawmakers accusing the kingdom’s de facto ruler of ordering the killing.But feuds among Arab allies, especially a Saudi-led economic and political boycott of Qatar, have hampered the founding of the alliance since Riyadh proposed it last year.

But feuds among Arab allies, especially a Saudi-led economic and political boycott of Qatar, have hampered the founding of the alliance since Riyadh proposed it last year.

A summit meeting in the United States where Trump and the Arab leaders would sign a preliminary accord on the alliance was expected in January. But the three US sources and a Gulf diplomat said the meeting now looks uncertain. It has already been postponed several times, they added.

Khashoggi’s murder raised “a whole bunch of problems” to be solved before the plan – informally referred to as the “Arab NATO” – can move forward, one US source said. One issue is how the Americans could have the Saudi crown prince, who goes by the initials MbS, attend the summit without causing widespread outrage.

“It’s not palatable,” the source said.

A senior Trump administration official denied on Tuesday that Khashoggi’s death complicated progress on the alliance, saying that MESA “is much larger than one country and one issue.”

Saudi Arabia has denied MbS’ involvement in Khashoggi’s killing and said an investigation into responsibility was underway.

Robert Malley, a top Middle East adviser to former President Barack Obama who now heads the International Crisis Group, a conflict prevention organization, said it would be difficult for MbS to attend a January summit “given what happened and how raw the feelings are.”

“I’m not sure he would want to come to the United States right now,” Malley said.

Retired Marine General Anthony Zinni, the administration’s chief MESA negotiator, said the initiative “is moving forward” but added that the impact of Khashoggi’s death was unclear.

“I don’t know yet how it will affect the process. Awaiting final investigation and decisions,” Zinni told Reuters in a recent email. “I think there may be a wait until the investigation (maybe forensics if a body is found) is complete before a way forward is discussed.”

The eight potential alliance members did not respond to requests for comment about their commitment to MESA.

Even before the fallout from Khashoggi’s killing complicated matters, two classified White House documents seen by Reuters show the administration was grappling for ways to overcome regional feuds and push MESA forward in order to contain Iran as well as to limit Chinese and Russian influence in the region.

“Our regional partners are increasingly competing and, in the case of the Qatar rift, entering into outright competition to the detriment of American interests and to the benefit of Iran, Russia and China,” National Security Adviser John Bolton wrote to Secretary of State Mike Pompeo and Defense Secretary Jim Mattis in a letter late summer, before Khashoggi’s death.

“To arrest these negative trends, we need to change our partners’ strategic calculus,” Bolton wrote in the undated letter, written in response to a June 29 memo about MESA from Pompeo and Mattis.

Three US officials, speaking on condition of anonymity, said there has been a debate within the administration about whether Washington can persuade Arab allies to put aside their differences, with Bolton emerging as a key proponent for the plan.

A fourth US official said the broad goals of MESA are widely shared within the administration, but there are discussions over the best approach for reaching a deal.

A Defense Department spokeswoman referred questions to the State Department but pointed out previous Mattis comments in support of the alliance.

A State Department official said the administration continued to “engage with our partners on working toward” the alliance.

The administration’s plan is aimed at furthering Trump’s “America First” strategy to reduce foreign military engagements and have allies shoulder more of the burden for their own security, while advancing US interests in the Middle East, according to one of the White House documents.

US interests in the region range from arms sales and striking Islamist extremists in Yemen, Iraq and Syria to ensuring the free flow of oil to global markets in order to keep prices stable.

One White House document, drafted before Khashoggi’s death, said Trump had warned the leaders of Saudi Arabia and the other members of the six-nation Gulf Cooperation Council (GCC) as well as Egypt that “the status quo is untenable and that the United States will not continue to invest in Middle East security” if they did not resolve their disputes.

It did not give details of Trump’s threat or when he made it.

Washington deploys aircraft, warships and more than 30,000 military personnel at bases in the GCC countries. Senior US military officials say they have no intentions to change that posture.

The strategy paper, titled “The Middle East Strategic Alliance Concept Overview,” calls for a series of short- and medium-term measures requiring “very little, if any, new US resource commitments to the region.”

The measures include developing regional “operational centers” aimed at integrating forces in areas such as missile defense, ground warfare and other fields, according to the paper and a source familiar with the plan.

A long-term goal would be a formal treaty alliance and a multilateral free-trade pact negotiated over perhaps five to seven years, the paper said. It also raised the possibility that the pact could eventually include Iraq, Lebanon and other countries, and formal ties could be forged with Israel and “select European and Asian allies.”

Without those “end-states,” the paper said, “our regional partners are unlikely to fully commit.”