“It Is a Matter of When—Not If”: Is James Mattis About to Get Voted off the Island? 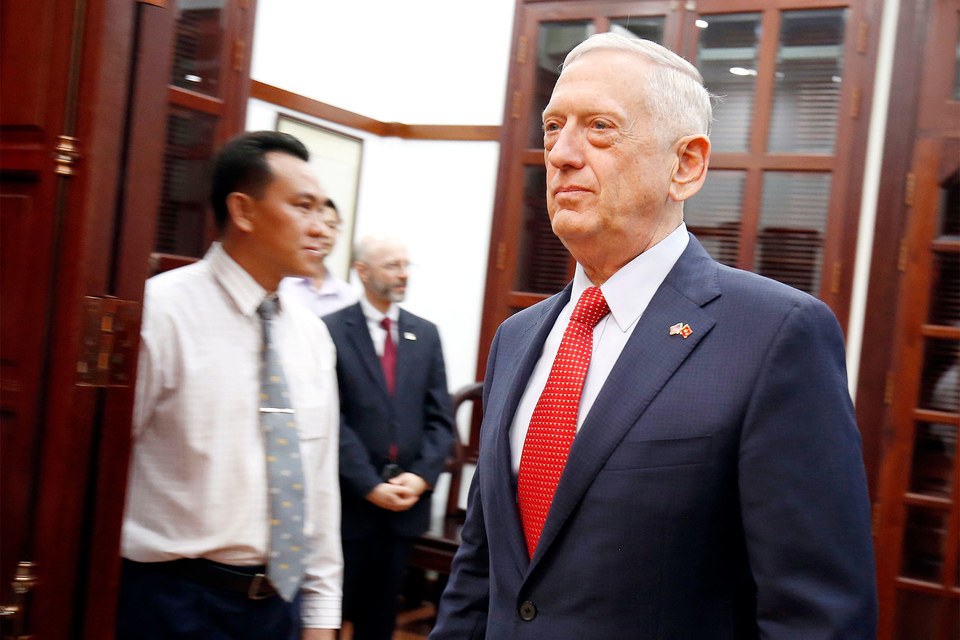 Defense Secretary James Mattis, initially sold to Donald Trump as “Mad Dog,” but better known inside Washington as a freethinking scholar-soldier, appears to have entered a familiar late stage of his White House career. “He’s sort of a Democrat, if you wanna know the truth,” the president told 60 Minutes in an interview last week, when asked whether Mattis was likely to stick around an administration with record turnover. “He may leave,” Trump continued, fueling speculation over a potential successor at the Pentagon. “I mean, at some point, everybody leaves. Everybody. People leave. That’s Washington.”

While Mattis refused to entertain the gossip, telling reporters Tuesday that he and the president have “never talked about me leaving,” there is little doubt in foreign-policy circles that the writing is on the wall. “This president just gets very bored of people,” a former administration official told me, noting how Trump tired of his second national security adviser, H.R. McMaster, and former Secretary of State Rex Tillerson. “That is just kind of how he operates, so everybody will be in his bad graces at some point. It is a matter of when—not if.” As Trump himself pointed out, it’s rare for Cabinet members to last an entire presidential term. According to one source close to the administration, there have been discussions about Mattis leaving for at least six months. “It is one of those jobs that it is not uncommon for people to leave after two years,” this person explained, though they were unaware of specific exit plans. “Certainly a lot of guys, they are at least thinking about it at heart at that point.”

Within the Washington establishment, however, the prospect of losing Mattis—the “last sane member” of the administration, as he has been called—is viewed with dread. “Mattis has quietly acted to push Trump in a less Trumpian direction on some key foreign-policy issues,” John Glaser, the director of foreign-policy studies at the Cato Institute, told me, highlighting the secretary’s moderating influence on North Korea, NATO, and the Syrian crisis. “He has also quietly curbed Trump’s most dangerous impulses . . . He has done both of these things in a way that eschews media attention and anything that might light Trump’s short fuse.” Former U.S. General Anthony Zinni, who served with Mattis and speaks with him often, also commended his tenure. “I can tell you that throughout the military, the retired community—I do a lot with the military—they just see him as the ideal secretary to have up there for a lot of reasons,” he told me, praising Mattis’s talent for remaining apolitical and centered in an administration that often feels like it’s spinning of its axis. “He certainly tries to keep himself and the military in that lane and I don’t think he has done anything as secretary of defense that anybody should have issues with.”

And yet, even Mattis—a well-read intellectual who joined the Marines at 18—may soon become a casualty of the pernicious office politics of Donald Trump’s West Wing. Sources I have spoken with suggested that the appointment of John Bolton, Trump’s warlike national security adviser, may have contributed to tensions with the Pentagon. “I am not saying that Mattis is not willing to use military force. That would be insane to say that. But what I am saying is that he does not advocate using it—as President Obama used to say—stupidly,” said Lawrence Wilkerson, a former United States Army colonel knows both Mattis and Bolton. “I think he would think that what John might recommend with regard to Syria, what he might recommend with regard to Iran, indeed with what he might openly recommend with regard to North Korea because we aren’t going anywhere there anytime soon—Mattis would not agree with.” Mattis and Bolton’s deputy, Mira Ricardel, are also said to have a contentious relationship dating back to the presidential transition.

The former administration official suggested that Trump’s characterization of Mattis as “sort of a Democrat” was the result of subterfuge by rivals inside the administration. “I think somebody put that thought in his mind. . . . I am sure that wasn’t a kind of spur-of-the-moment, thinking-out-loud remark by the president. It has probably been repeated in front of him,” they told me. If so, the internal power struggle has been unusually muted. The source close to the administration said they hadn’t heard of “any blowups” between Mattis and Bolton or Ricardel, and stressed that disagreeing is part of the job. “If you get guys at that level, if they are doing their jobs they don’t agree on a lot of things on a regular basis,” they told me. (In a recent statement Ricardel said she has “great respect” for General Mattis.)

For all the intrigue, of course, the best predictor of longevity in the White House is chemistry with Trump, himself. Mattis was likely always going to be an odd fit for an administration that rewards obsequiousness and punishes dissent. “He is the one who is not going to take any guff from Trump,” said Wilkerson, who has know Mattis for many years. “I mean, he is not going to be disrespectful or anything, but he is going to say, ‘Mr. President, you are naked,’ when he thinks that the president is naked.”

Even for an administration accustomed to chaos, replacing Mattis will be a politically charged exercise. “The most powerful man in the government outside the president of the United States is not the national security adviser, it is not the secretary of state, it is the secretary of defense,” Wilkerson told me. “He’s got more money, he’s got more allies on the Hill, he’s got the military behind him—they have guns. The most powerful guy is that guy—and the presidents muck with them at their peril.” The task becomes even more difficult if Mattis doesn’t go willingly. The former administration official stressed that Chief of Staff John Kelly, who views Mattis as one of his last remaining allies in the administration, would likely fight Trump if ever tasked with firing Mattis. “He would do everything in his power to not do it. I am not sure, if there was a final direct order, if he would resign over it,” this person said.

The true impact of a Mattis departure will hinge upon his successor. Arkansas Senator Tom Cotton; former Treasury Department official, combat veteran, and businessman David McCormick; retired four-star Army General Jack Keane, former Missouri Senator Jim Talent, and Dan Coats, Trump’s director of national intelligence, are among the names currently being floated as potential replacements, according to Foreign Policy. Who Trump ultimately selects could have massive implications, not only for the future of U.S. military engagement, but also for how the federal government divvies up the department’s $717 billion annual budget. “The Pentagon is perhaps the most difficult bureaucracy on earth to run. It is the largest not-for-profit organization on the face of the earth. It uses more fuel than the rest of America combined. It is awesome and it is out of control already. . . . It is a disaster that is held together with bandaids, tape and the leadership at the top,” Wilkerson told me. “What people would fear about someone who is utterly inexperienced and has no idea about what he”—or she—“is doing there.”