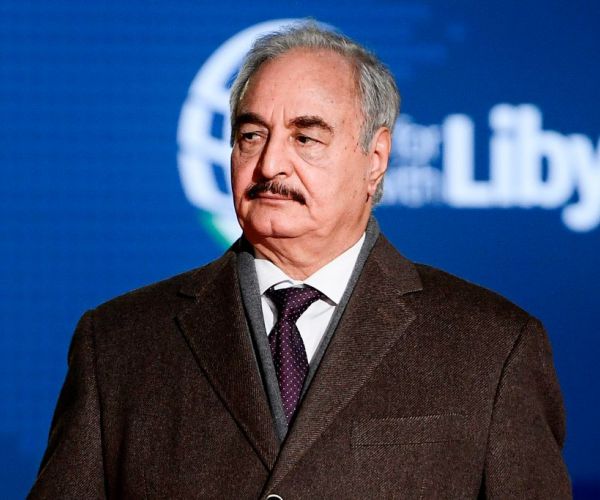 As official Washington celebrated Easter and Passover over the weekend, public officials and pundits were still floored over the news Thursday that President Donald Trump had made a telephone call of encouragement three days before to Libyan Field Marshall Khalifa Haftar — an insurgent warlord now leading an attack on the capitol city of Tripoli to take control of the oil-rich nation from its civilian government.

Sources close to the Administration told Newsmax that National Security Advisor John Bolton was the pivotal figure pushing Trump to embrace Haftar — a potential strongman ruler of Libya — over the Government of National Accord (GNA) headed for three years by Prime Minister Fayez al-Sarraj.

Bolton’s vision, one source told us, is “in a Libyan landscape besotted with radical militias and anti-American Islamists, an aspiring strongman like Haftar with past links to American intelligence, may be the best of a very bad bunch for U.S. interests.”

In addition, several sources agree that an oil-rich Libya — one which exports more than half-a-million barrels of oil per day to world markets — plays a role in the strategy of Trump and Bolton to cut off oil exports to Iran and Venezuela.

“President Trump and John Bolton have a deep interest in events in Libya, as they seek to stop oil from going to hostile nations and keep it flowing to U.S. allies,” John Hannah, onetime National Security Advisor to former Vice President Dick Cheney, told Newsmax.

“No doubt part of the President’s message to Haftar was that even as his forces march on Tripoli, it will be essential that they do nothing to disrupt their flow of oil to world markets.”

According to a statement from the White House, Trump “recognized Field Marshall Haftar’s significant role in fighting terrorism and securing Libya’s oil resources, and the two discussed a shared vision for Libya’s transition to a stable, democratic political system.”

To Libya-watchers on all sides, that statement represents nothing short of a dramatic turnabout from the U.S. policy in the past that recognized the GNA and Prime Minister al-Sarraj as Libya’s rightful rulers.

Earlier this month, Secretary of State Mike Pompeo underscored this policy by denouncing the strike by Haftar’s forces — which control Benghazi and Eastern Libya — on Tripoli.

“We have made clear that we oppose the military offensive by Khalifa Haftar’s forces and urge the immediate halt to these military operations against the Libyan capital,” said Pompeo, “This unilateral military campaign against Tripoli is endangering civilians and undermining prospects for a better future for all Libyans.”

That was in early April. Now, in late April and following Trump’s call to Haftar that policy has obviously changed.