A Threat in Trump’s Back Pocket: Shaking up the Global Oil Industry 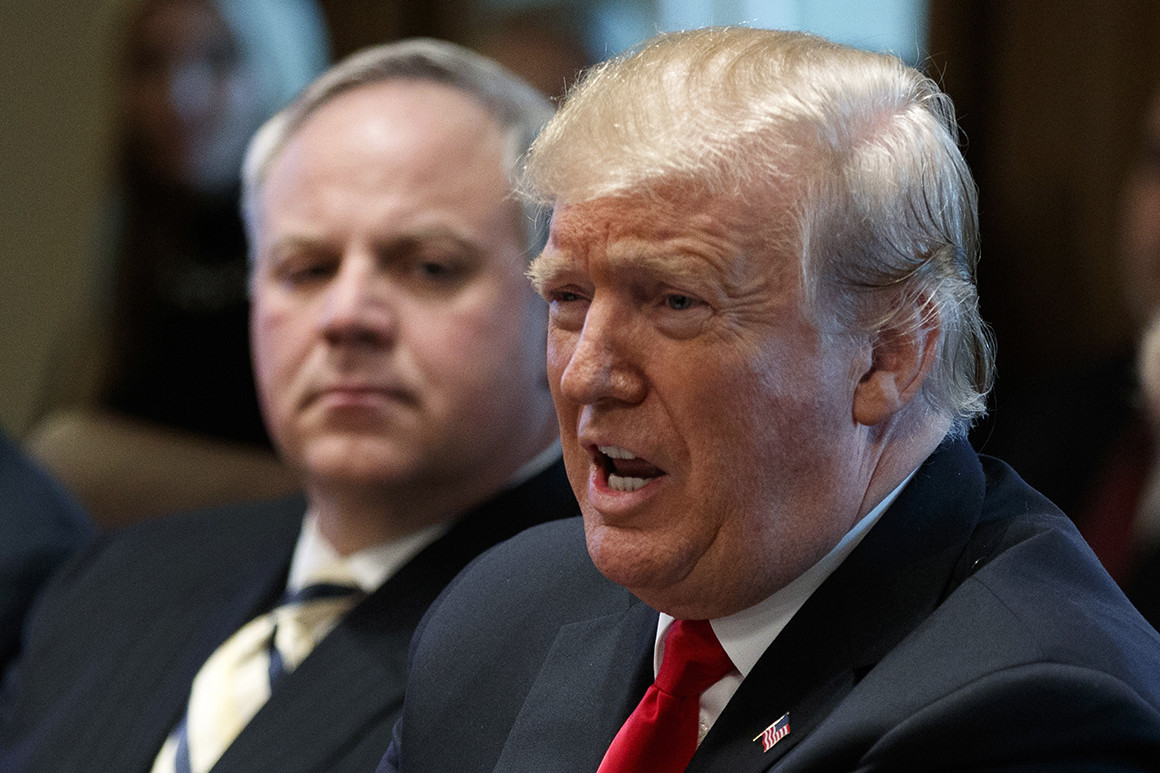 Taking a cue from President Donald Trump, U.S. lawmakers could soon have a new message to foreign oil producers: NO COLLUSION!

Now Trump’s saber-rattling on OPEC has oil producers and traders unnerved by the prospect he could back cartel-busting legislation that sends prices into a tailspin.

The No Oil Producing and Exporting Cartels Act, a bipartisan bill known as NOPEC, would allow the attorney general to bring an antitrust suit against the bloc — removing the sovereign immunity that currently protects OPEC countries. Lawmakers have been trying and failing to turn it into law for two decades.

Trump’s badgering of OPEC has breathed new life into the effort and renewed attention on it from Wall Street to Texas shale fields to OPEC’s Vienna headquarters.

“We are hostage to other countries’ decisions based on their national interests, not on ours,” retired Adm. Dennis Blair, director of national intelligence under Obama and a NOPEC proponent, said recently.

Long before he became president, Trump openly endorsed the idea in his 2011 book “Time to Get Tough.” Assistant Attorney General Makan Delrahim, who heads the Justice Department’s antitrust division, backed NOPEC in a 2008 op-ed. The DOJ, which would have the ultimate power to bring a suit, hasn’t taken a position on the bill and declined to comment.

Trump closely tracks oil prices — which are featured regularly on cable TV business programs — and has tweeted frustrations with OPEC nine times over the past year, usually whenever price spikes push the threat back into headlines. He’s tweeted another seven times about oil prices and production more broadly.

His oil fixation appears to come from a recognition of oil’s pivotal role in the economy: Rising gasoline prices, which can quickly burn through consumer pocketbooks, have been associated with most U.S. recessions since World War II. Yet two nations Trump has engaged with most — Russia and Saudi Arabia — are pivotal in pushing prices higher.

The Trump tweets are turning heads around the world. They’re often moving markets, at least for a day or two. And Trump has helped reanimate the OPEC bloc as one of American politicians’ favorite international boogeymen — in part a holdover from dynamics of the 1970s and ’80s that still underlie many of the president’s political instincts.

Oil experts are split over what happens next. They’re waiting to see if Trump will finally weigh in on NOPEC from the White House — particularly if prices rise much more over a short time period. Those two changes are “the matches that could set the thing afire,” said Bob McNally, president of consulting firm Rapidan Energy Group.

Heading into Trump’s re-election campaign, the national average price of gas currently sits under $3 per gallon. It’s been rising gradually through most of 2019, though oil prices are still below their most recent peak in early October. Crucial Midwestern swing states have seen some of the biggest hikes this year.

Some analysts predict that if it breaches the $3 threshold, pain at the pump will surge into political salience. Trump’s political team has been focused on touting the country’s extended economic expansion, on track to become the longest in history this summer, as a central reelection messaging plank.

Politicians have been happy to cast OPEC as the central culprit behind high gas prices for decades. Many still do.

But that might not reflect reality as cleanly as it once did. U.S. oil production has been surging during the Obama and Trump administrations, consistently breaking old records.

As the energy landscape has swung toward U.S. shale production, what’s best for American businesses and consumers isn’t as clear as it was during the 20th-century OPEC battles.

“The ideal oil price for the U.S. now may be a Goldilocks scenario of not too high, not too low,” said Jason Bordoff, director of Columbia University’s Center on Global Energy Policy.

Enter NOPEC. It’s a debate that scrambles the usual partisan battle lines and dances across nearly every foreign policy flashpoint.

Supporters view the bill as a fundamental free-market measure, applying the principle of fighting anti-competitive corporate collusion to countries that are acting like businesses. They say oil markets should be left to supply and demand — not manipulated by a group that has wielded significant control over prices for decades.

Even momentum toward passage could already be giving the U.S. leverage. “I think oil prices would be $10 higher but for the fact that this bill is threatening,” said Amy Myers Jaffe, director of the program for energy security and climate change at the Council on Foreign Relations.

An array of NOPEC opponents — including the U.S. Chamber of Commerce, domestic oil interests and OPEC member nations — warn that the legislation would plunge the oil world into chaos, unsettling markets where OPEC has recently acted as a stabilizing force. Price spikes might follow, but so could a crash in prices not seen in decades.

That would ravage the growing U.S. oil industry, which last year leapt ahead of Russia and Saudi Arabia to become the largest producer of crude oil in the world and supports millions of jobs.

Opponents also worry that NOPEC would upend fragile diplomatic relations with Saudi Arabia and other states in the bloc.

OPEC is signaling concern. The bloc reportedly has been considering its first-ever major influence campaign in the U.S. to try to improve its public image. OPEC officials have warned Wall Street about risks from NOPEC. Russia in December even cited the bill as one reason it didn’t want to pursue more formal integration with OPEC.

NOPEC has appeared to divide the Trump administration, which has been mulling it internally through an interagency review process for months.

Energy Secretary Rick Perry warned in February that the bill could have ramifications “way past its intended consequences.”

Many experts expect the ultimate decision could emerge in a Trump tweet. “That would be a pretty straightforward catalyst,” said Kevin Book, managing director for research at ClearView Energy. “This is a bill that’s going to be difficult for the Congress to stop.”

NOPEC sailed out of the House Judiciary Committee without objection in February — a rare occasion for bipartisan bonhomie, as Rep. David Cicilline (D-R.I.) called it “a tool to speak softly and carry a big stick.”

But the bill has yet to come up for a vote on the House floor or in Senate committee. The office of Senate Judiciary Chairman Lindsey Graham (R-S.C.) declined to comment.

Several experts told POLITICO that vocal support from bands of Judiciary Committee members hasn’t historically extended up the ranks. And Trump’s predecessors consistently threatened vetoes. Even when NOPEC has progressed — it passed both chambers in 2007 — the bill never had presidential support.

“House and Senate leadership are not enthusiastic about this thing,” McNally said. But if Trump backed it, “is Mitch McConnell going to die on NOPEC Hill? I don’t think so.”

Some lawmakers who favor NOPEC view it as a way to punish Saudi Arabia if Trump won’t otherwise take on Crown Prince Mohammad bin Salman, who is seen as a Trump administration ally.

But a tangled web of foreign policy considerations is at play. Dangling over the debate are two impending deadlines and several geopolitical crises, such as chaos in Libya.

The Trump administration’s sanctions on Iranian oil have tightened oil supplies, helping drive prices up. The announcement this week — ahead of an early May deadline — that the U.S. will end waivers for several countries that are still buying Iranian oil could nudge prices even higher. Iranian officials in return threatened to close the Strait of Hormuz, which is crucial for moving oil.

Already, oil prices rose Monday on the news, though Trump tweeted a rare message of cooperation with OPEC to try to tamp down concerns: “Saudi Arabia and others in OPEC will more than make up the Oil Flow difference in our now Full Sanctions on Iranian Oil.” That coordination, if it pans out and tames prices, could spell bad news for boosters of the NOPEC legislation.

In June, OPEC and allies like Russia will convene in Vienna. There they’ll debate whether to continue supply cuts that reduced output by more than 1 million barrels a day.

Then there’s the crisis in Venezuela. The ongoing political tumult and massive humanitarian disaster under Nicolás Maduro’s authoritarian government had already shrunk oil output — and then the Trump administration’s sanctions, aimed at forcing Maduro out, hit.

Even as new foreign policy developments alter the NOPEC calculus daily, there’s plenty of skepticism that Trump will actually go out on a limb and endorse it — without which it might be difficult for backers to muscle the bill past congressional leaders.

In the administration, “the reticence is because of just how big of a market impact this [could] have,” said Varsha Koduvayur, a senior research analyst on the Gulf states at the Foundation for Defense of Democracies, a Washington think tank. It would be “unprecedented to strip the sovereign immunity that has guarded OPEC members” for six decades, she added.

And lawmakers might prefer other avenues to punish Saudi Arabia for its perpetuation of Yemen’s humanitarian disaster and the murder last year of Washington Post columnist Jamal Khashoggi. Both chambers recently tried to force Trump’s hand on support for the Yemen war.

But with ties to so many volatile countries and mercurial political actors, the NOPEC debate could bubble above the surface at any moment.

“In today’s world,” Jaffe said, “it’s very hard to predict what could blow up.”