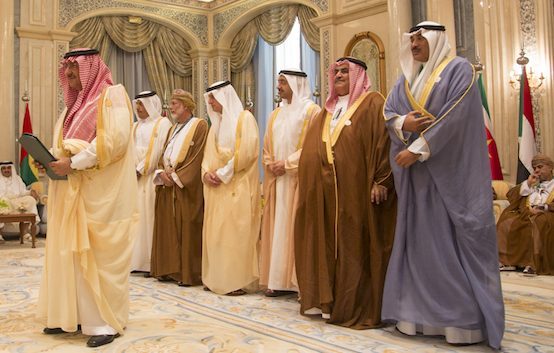 A delegation of the Leaders of the Cooperation Council for the Arab States of the Gulf Countries are seen Sunday, May 21, 2017, at the King Abdulaziz Conference Center in Riyadh, Saudi Arabia. (Official White House Photo by Shealah Craighead)

In an effort to sell his ideas for an “Arab NATO,” President Trump has asked retired General Anthony Zinni, the former head of the U.S. Central Command, to shop it around. And Zinni has complied—he’s now making the rounds in Washington with Timothy Lenderking, the U.S. deputy assistant secretary of state for Gulf affairs, before heading out to the region.

Zinni is pitching not so much a plan for the aspirationally named Middle East Strategic Alliance than a set of principles, all familiar to those even passingly acquainted with White House policy. Washington wants its friends to re-up their opposition to ISIS and support for its “enduring defeat” and to oppose the malign machinations of Iran and its regional proxies.

So far so good.

But while declarations of intent along these lines are relatively easy to obtain, the diplomatic landscape of the Middle East is littered with the carcasses of great ideas for collective security—all of them undone by the inability of its architects to devise and commit to an operational plan for collective action.

So far, Washington’s ideas for an Arab NATO are just that—ideas. Consistency of purpose is not the best description of foreign policy under Trump, and MESA is no different. At this point there is no reason for Zinni’s skeptical Arab interlocutors to do more than listen and nod politely, awaiting further details from Washington.

Arab reservations are well-grounded. This not the first time that the Trump administration has come calling on its Arab friends with big plans.

Earlier this year, a half-baked idea to win Egyptian and Saudi support for the deployment of their armies to areas of eastern Syria carved out and run by Washington’s Syrian Kurdish allies was, for a brief moment, Washington’s plan du jour. The reasons for its quick demise are too numerous and self-evident to enumerate. Suffice it to say that there is absolutely no basis to assume the interest or readiness of Cairo or Riyadh, no matter their views of Assad, to undertake a hostile deployment of their already stretched and untested armed forces in faraway Syria to cover an American retreat.

Nevertheless the stillborn effort to mobilize Arab allies offered evidence of the Trump administration’s aspiration to rise to the multifaceted policy challenge defined by its desire to annihilate ISIS, contain unprecedented Russian advances in Syria, and effect “the exit of all Iranian military and proxy forces and the establishment of a stable, non-threatening government acceptable to all Syrians.”

After all, devising a successful U.S. policy for Syria, let alone establishing a multilateral collective security framework to address the serial crises that define the region, would be a tall order under the best of circumstances.

As former commander of CENTCOM, the retired Marine four star, is, along with David Satterfield, among the best and most credible U.S. envoys on offer. During the last year as Trump’s special envoy, he has tried—albeit without success—to put an end to the dispute between Qatar and Saudi Arabia. Plans for a Washington summit of the paralyzed GCC this fall have been cancelled. No matter. The White House just pretends that the rift is an internal matter that doesn’t influence broader cooperation against shared challenges.

The Trump administration has no claim to authorship of this strategy. Herding reluctant Arab antagonists into collective defense schemes, described by a State Department official in 1950 as an “attempt to build bricks without straw” has been the bane of U.S.-led efforts to compel Arab allies to “stand up and be counted” for almost seven decades.

Since the end of World War II, the U.S. has led on-again off-again efforts to bind Arab states  in a “steel chain of treaties.” The Tripartite Declaration, followed by the Middle East Command, Middle East Defense Organization, the Baghdad Pact and the Central Treaty Organization offered an alphabet soup of acronyms attesting to Washington’s persistent efforts to support the Arab military caste in their respective capitals, draw attention from Israel, score points in the Cold War sweepstakes, and create a credible rationale to provide (U.S.) arms.

All too often however, U.S. efforts, even when they succeeded, proved to be merely “a formalization of weakness,” both as it related to the added value resulting from collective security institutions like the Baghdad Pact and to the anti-Western revolutions produced in countries like Iraq, and Syria that allied themselves openly with the West.

Today, the power and presence of the “resistance axis” together with a resurgent Russia presents a far more substantive and effective threat to U.S. allies in the region than the Soviet Union ever did. Ditto for the Islamic State which survives to fight another day in a region dominated by weak, discredited states.

Washington has yet to address seriously the very real difficulties that have stymied efforts to rollback Iran and undermined local allies who joined the effort. Nor have the real world challenges of collective defense been formulated let alone resolved, beginning with winning political and operational support for a “one for all all for one” commitment—NATO’s hallmark— from nominal allies who cannot abide each other.

The NATO reference itself is misleading.

“The immediate effects of a loose regional defense grouping … backed by U.S. military aid programs would be primarily a political and psychological rather than military,” noted a JCS report “Interim Military Objectives for Iran.” Furthermore:

However, together with the US military aid programs it would create greater opportunities that in the past for reducing existing Middle East defense deficiencies. The requirements for outside ground forces might eventually be significantly reduced. However the achievement of this limited goal would be a long and costly operation involving considerable training and equipment over a period of years, and effective Middle East defense will continue to depend for this foreseeable future on substantial Western force contributions.

The analysis was written in 1955, but it could have just as well been written yesterday.

Geoffrey Aronson is chairman and co-founder of The Mortons Group and a non-resident scholar at the Middle East Institute. His views are his own.